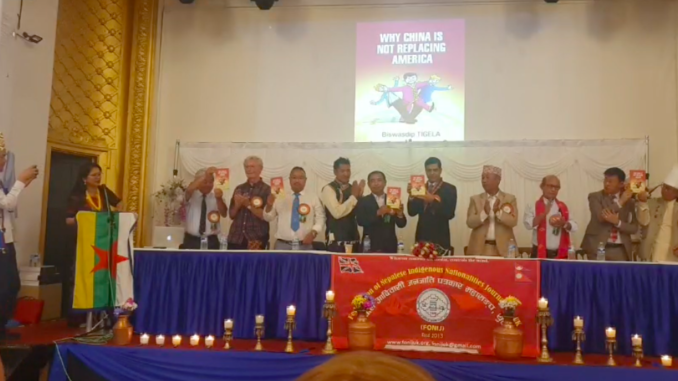 On August 14, 2022, the book Why China Is Not Replacing America has been released in Aldershot, UK.
The Nepalese ambassador to the UK, Gyan Chandra Acharya, released the book during a ceremony. The book writer Biswasdip Tigela, who holds a degree in political science and a master’s degree in international relations from the University of Canterbury, has published a book by Independent Publications UK.
While the Western strategy of encircling China, Tigela talks about China’s Tibet problem, oppression of Uighur Muslims in Xinjiang province, Taiwan, Hong Kong, and the South China Sea conflict.
The Belt and Road initiative, against the influence of the World Bank and International Monitory Fund there, is a  BRICS alliance, the agreement to develop military weapons between China and Russia, the political structure of the Chinese government, the nature of the Chinese communist system, the rights and opportunities provided by the Chinese government to the indigenous peoples of China, the Chinese political father Mao Zedong, the father of the Chinese economy Deng Xiaoping. Also, author Tigela has covered socialism with Chinese characteristics, which President Xi Jinping has promulgated.
Chinese leader Mao Zedong said that power comes from the barrel of a gun, but on the contrary, he commented that Chinese power comes from shovels and cement. Due to the power of building structures, the whole of Africa, partially Latin America and parts of Asia are listening to China. However, the United States, the West, and the Five Eyes countries are doing everything possible to stop China’s influence and keep it in a limited role. Because of the policy, Tigela has already said that China cannot replace America’s international role, but after some time, the possibility we cannot be denied.
Author Tigela made a presentation on the system of China, Canada and India on how the rights of indigenous peoples have been constitutionally protected and managed in other countries. The book release program was Chair by Karma Pahadi, president of NEFIN UK, and NEFIN General Secretary Bimala Sen was the moderator.